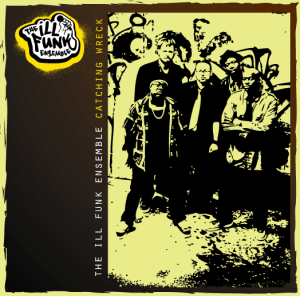 Capturing the energy and chemistry of live performances onto a studio recording is a difficult task for any band, even talented ones. Fronted by lead MC/vocalist Jermaine Wells, Albany, NY-based band Ill Funk Ensemble runs up against this contradiction with their independently released debut album,Catching Wreck. This five-man outfit is known in the local club scene for their creative set of cover songs, performing classics from Notorious B.I.G., the Jackson 5, and others. But, despite the obvious talents, the band cannot seem to duplicate that originality with their own material.

Absorbing elements of rap-rock, contemporary R&B, the blues, and jazz, Catching Wreck is definitely feel-good music. Block party-type themes of having a good time and women, plus some good old hip-hop braggadocio dominate the LP, save for a few more substantive, albeit abstract, tracks, like “Troubleman” and “Damned If You Do.” But with this very popular subject matter, Wells and co. seem to just rehash early-‘90s R&B riffs and late-‘90s pop-rock melodies. More than a few times throughout “Summertime,” the band appears to borrow from Warren G, Mint Condition, and perhaps even ‘N Sync, which would not be as bad if it didn’t sound all too familiar. And, of course, it doesn’t help when there are some well below-par verses and poorly conceived hooks (“You’re so sexy, we be gettin’ sexy/It’s so sexy… So sexy, sexy, sexy” on “Sexy”).

Interestingly enough, some of the album’s faults point to the impressive, versatile abilities of the instrumentalists, namely BJ Fitzgerald (guitar/vocals), Duane Etienne (bass/vocals), Joe Stoner (keys/vocals), and Dennis Brooks (drums/vocals). When the verses finish on tracks like “Get Down” or the title track, the band likes to kick into free-for-all jam sessions. On the former, the horn player’s lively and piercing solo gives the band a chance to show off its jazz-funk chops and rhythm-backing capabilities; but, the latter features Fitzgerald as the show-stealer, ending “Catching Wreck” with a deft, blues- rock improvisation.

All criticisms aside, Catching Wreck is far from a horrible listen. Having the expertise of professional musicians at the group’s exposal will cause expectations, especially among hip-hop listeners, for inventive ideas to be much higher. It’s fairly clear that Ill Funk targets the pop-rock crowd more than, say, long-time fans of the Roots, but they still need to devise their own artistic lane to stand out.