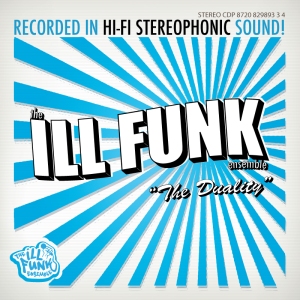 The Ill Funk Ensemble (IFE) are a blast from hip-hop past. On their new album release, THE DUALITY, this old school hip-hop group offers up a hefty serving of beats, rhymes, soulful melodies, with a hint of pop edge. Having shared the stage with hip-hop legends like Naughty By Nature, Ill Funk Ensemble have helped keep hip-hop at the forefront of the music world.

What also makes IFE unique is the fact that they are a band. While the album doesn’t really showcase the band’s play, since majority of the production is programmed, they play live in their performance sets similar to The Roots.

Taking the high road of delivering serious boom bap has proven to be a great lane for IFE and its going to pay off big for them if they have the right marketing push for this new release. THE DUALITY mixes things up a bit by fusing that old school rap flows with r&b vocals and funk driven tracks, which is what you’d expect from a New York based hip-hop crew.

Overall, Ill Funk Ensemble makes a strong showing on THE DUALITY, and I’d like to see how well the project is received. I encourage those who enjoy groups like The Roots to check out IFE’s new release and download it to support independent hip-hop artists.